HTTP  —  Hypertext Transfer Protocol  —  is how client and server (frontend and backend) talk to each other. As frontend developers (and web developers in general) we should understand at least the basics of this communication, because an important part of our job is to send requests to the server and handle the responses.

Basically the way that communication works is by exchanging messages. The client sends a request and the server sends back a response.

Anatomy of a request

An HTTP request is composed of the following parts:

Also referred as verb, is the kind of action to be performed (GET information, POST information back to the server, etc). The most common are:

Uniform Resource Identifier — is the path on the server that identify the information (the resource to be fetched, created, modified).

Additional information about the request and about the client, in the form of key-value pairs.

Optional. The content the client sends to the server. GET and DELETE requests usually don’t need one. For POST, PUT and PATCH requests this is where the information to be created or modified is sent.

Anatomy of a response

An HTTP response is composed of the following parts:

Indicates, by a numeric code, whether a request has been successfully completed. They are grouped in five classes, identified by the first digit. Some of the most used statuses are:

Like the request header, this contains additional information about the server and about the response itself.

Optional. This is the content returned by the server.

See some examples of how to send HTTP requests on the frontend and how to handle responses.

Example #1: GET information about the latest React release on GitHub 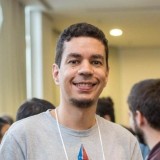 Web Design for Everybody
Full-Stack Web Development with React